When mixing you just try to beatmatch. But you can also try to match the harmonics. That's called "Harmonic Mixing".

Each track is written in a certain musical "key". Some of those keys sound well with each other, while others don't. Learning which keys are suitable isn't very handy. So that is where the "camelot wheel" comes into play. It gives all musical keys a 'code', which makes it easier to see which tracks can be mixed harmonically. The codes with a B are major keys. The ones with A are minor keys. 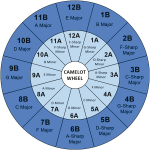 How it works
You can mix your track with another track with the same code. Or go up a number, or down. You can also switch letter. So for example, when you play Rank 1 - Airwave (which is in D-minor, code 7A), you can mix in a track with 7A, 7B, 6A, 8A.

Adjusting the BPM and its effect on the key
With 'Master tempo' on, the key will always be the same. But if you turn that off, the key will shift. When it's off, you can change the pitch to around 2% without noticeably changing the key of the track. This means without 'Master tempo', don't change the track more than 2-3 BPM's, because the key of the track will change too much.

So you can use this trick to your advantage. If you are playing uplifting trance a la 138 BPM, and the track is in code 2A, then you can mix Thrill with that just perfectly.

Which key is my track?
You can try to keys of your music manually, by playing notes on a (online) piano for example. Bbut it will take you quite some time. There is also special software called "MixedInKey", which does this for you, but its quite expensive, and not 100% accurate either. Beatport also shows keys, and also that isn't 100% accurate. I personally do it manually for all tracks I want to play.