Spacetime said:
It feels wrong for them to decide to play there, for partying and conscription of soldiers to invade another sovereign nation to existing at the same time, with the same people. I'm sure there are many Russians who don't like this war, I am sure of it, but it doesn't seem enough. I would love to hear from a Russian person on how they believe the support to be split, because you can be certain you wont get the honest picture from my US news. It's clear it has a lot of support, I would just like to know the ratio.
Click to expand...

I'm sure most of the russians on this forum will most likely support Ukraine, BUT unfortunately most of those in russia who support the annexation of 15% of our country (which occured yesterday) don't really speak English and will not answer you here.

I believe the ratio is ~70/30, and unfortunately the amount of "ruscists" is more then amount of "russians". But noone really knows the picture, as those who try to oppose are usually being sent to jail / poisoned by "Novichok" or killed - so these 30% might just not take part in these votings.

As you know, there's no opposition in russia, and if there is, it's most likely hiding somewhere abroad. So nowadays it's hard to oppose the government as they immediately mobilize you as "meat" to go and die in Ukraine under our shellfire.
Reactions: IXM
D

How are people over there handling the "annexation" of the 4 regions of Ukraine?

That sounds so fake and full of shit given that Russia hasn't really been winning...

dmgtz96 said:
How are people over there handling the "annexation" of the 4 regions of Ukraine?

That sounds so fake and full of shit given that Russia hasn't really been winning...
Click to expand...

People in the Donbas support this move since they feel abandoned by the government of Ukraine after so many years of neglect.
Reactions: dmgtz96
D

dmgtz96 said:
How are people over there handling the "annexation" of the 4 regions of Ukraine?

That sounds so fake and full of shit given that Russia hasn't really been winning...
Click to expand...

the people in the Luhansk/Donesk region have been, for the most part, fighting a (guerillia) warfare against the Zelensky regime since the coup 'd etat in 2014. So even had this been a proper referendum (which its not) the results would most likely be in favor of joining the RF in those regions.

I don't see it as much of an annexation really. its basically all still contested battleground, exception of the Crimea. What this is, is basically a legal/constitutional loophole for Putin to áctually mobilize a large part of the Russian Defence/ Offence force seen as his tiny "militairy operation" is currently getting hammered in Ukraine's counter offensive.

From a tactical perspective time is, like said, on Putin's side. With the coming of the (russian) winter offensives from Ukraine will become increasingly difficult, whereas the Russians can just dig in. Sifting the advantage to spear-head offender to dug in defender. When the spring hits a newer, larger Russian force will be fully mobilized and not make the same mistake with say: the T72 tanks twice. Which is why Ukraine needs to push as much as they can now whilst also focussing on destroying or disabling supplyline infrastructure from and to the Crimea.
Reactions: dmgtz96

Most of you probably heard of such trance producer as Tycoos aka Evgeny Vlasov - he's the A&R manager of Abora Recordings and as appeared, another ruscist.

A friend of mine - F.G. Noise aka Evgeny Andrusik, an uplifting trance producer from Ukraine, has shared Evgeny's comment from VK (it's a quite popular social media, controlled by russian government) about the situation in March 2022, 1 month after the invasion has started.

Here's the translation of the first paragraph:

It is the Ukrainians who are to blame for what is happening now. It was you who voted for your constitution, which directs the country's course in the EU and NATO. Add to this NATO trainings, weapons supply, and so on. Ukraine is obviously becoming more & more aggressive neighbour. Having made such decision, the people of Ukraine should have understood the following direct confrontation with Russia. You people are not stupid, you did understand that. Russia does not need such an aggressive neighbor, Russia has come and is getting rid of the problem.
Click to expand... 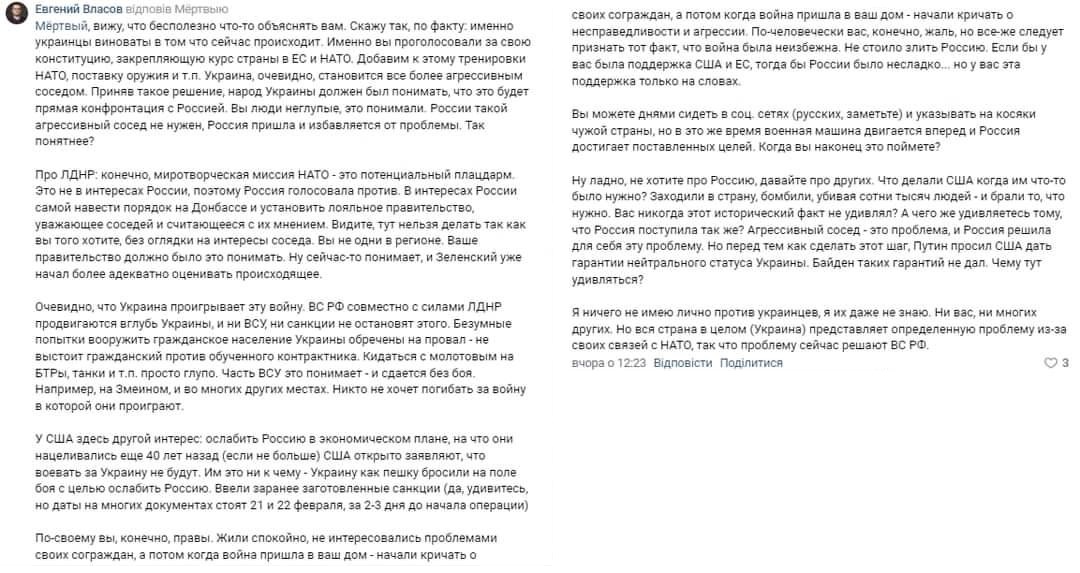 Later on he was just stating that russia is doing a good job, USA wants to economically weaken russia since 40 years ago, asking in the following comments about the "8 years Donbas bombings", stating that Donbas should belong to russia, "NATO's connection with Ukraine will harrass russia", blah blah blah, too much shit I'm tired to translate - if you want to know what he wrote then just watch any russian-state-controlled TV program.

So after Harpaul (Abora CEO / Ori Uplift) had a talk with Tycoos regarding this, Tycoos explained him that "he was not giving his own beliefs or point of view, but was merely trying to explain what Putin and the Russian propaganda were saying" - Tycoos is lying here, as there are already too many proofs in russian language that he's just stating his own beliefs.

Here's another proof he's lying (I'm lazy to translate it):

He also made this post, which also is a poor justification, as his comments from above just don't match with his words. Also confirmed by one guy from Poland that he's a full putin's supporter and is still justifying the violence. 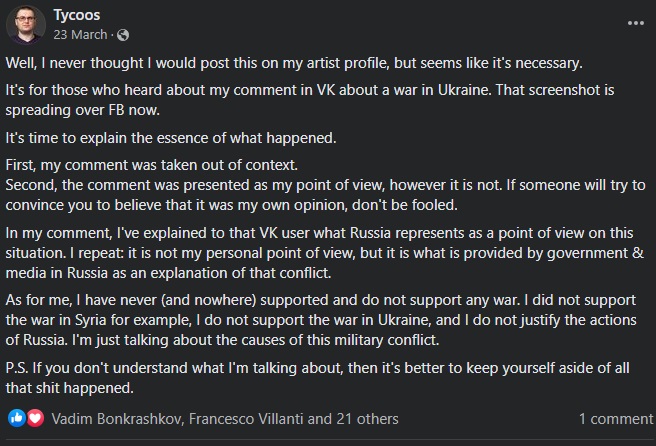 Now you might think twice before having a talk with this ruscist.


That's enough. I am ashamed to be his compatriot

fuck russia. but when it comes to music and forum I think it's a different topic. it would be good if this place were not a place of war. I'm sorry that it affects you directly

Politics and Music should not be together. They just don't gel well.
Reactions: JohnnyBarefoot1992
D

Progrez said:
Politics and Music should not be together. They just don't gel well.
Click to expand...

That's just not going to happen in 2022. Nowadays your politics are a reflection of who you are, and people will associate with you or reject their association with you based on your political orientation.

dmgtz96 said:
That's just not going to happen in 2022. Nowadays your politics are a reflection of who you are, and people will associate with you or reject their association with you based on your political orientation.
Click to expand...

I hate politics to be honest. That's why I left my public servant job because I just had about enough of it. It's nothing more than people trying to test their ability to argue against one another and that leads to bullying and what not.
Reactions: IXM and dmgtz96
D

Progrez said:
I hate politics to be honest. That's why I left my public servant job because I just had about enough of it. It's nothing more than people trying to test their ability to argue against one another and that leads to bullying and what not.
Click to expand...

well, yeah... politics doesn't (shouldn't) have a place at work

Uplifted said:
13th of September the most popular russian radiostation Radio Record has announced the annual Trancemission (Трансмиссия) festival which will be held in Moscow and Saint Petersburg in November.

We can spot the famous Heatbeat from Argentina and two egyptians on the lineup - Philippe El Sisi and Omar Sherif, who have gained quite a nice reputation around the uplifting trance listeners, thanks to Aly & Fila support in FSOE radioshow.
Click to expand...

Due to the introduction of high alert in a number of regions and the growing tension, we have made the difficult decision to postpone the festival to the spring of 2023. Until the last moment, we made every effort, but the arrival of foreign headliners in the current situation, alas, is impossible.
We believe that in the spring we will be able to hold the festival at a level worthy of Transmission and maintain a strong and up-to-date line-up.
Click to expand...

(yeah, right - the only artists they will be able to bring are the russian ones) 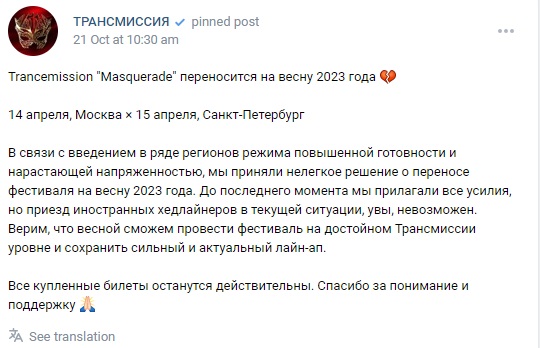 Despite that it got cancelled, I will still remember how Heatbeat was ready to come to russia to perform at this event - his post on facebook is still there. What a sellout

And of course Philippe el Sisi & Omar Sherif haven't replied to a single comment/message of mine regarding this event in russia, yet they reply to quite a lot of "positive" comments about their tracks/events.

Progrez said:
Politics and Music should not be together. They just don't gel well.
Click to expand...

They shouldn't, but I agree with @dmgtz96 in that given the current social (media) climate, they've become somewhat interlinked. Consequently you will be austricized by one group or the other, one way or another.

My advice is, since you're screwed anyhow: Speak the Truth. Come what may. And let history make up its own mind.