While having everyone at each other's throats entertains me immensely, please refrain from pointless sarcasm. You're not House MD, and we're trying to help each other here - being nice is a requirement for that.

I'm hoping we, as TF, can make some difference (even for you) with the things we're doing right now. But even then, the Internet is just overcrowded with information. Sometimes I feel that it's really hard to make any difference starting from the ground up. But I love still seeing people try.
Reactions: Sleepy Robot
H

Yes Enlusion, it's really simple. What you should do is just sell more copies of your releases. Problem solved.
Reactions: Sleepy Robot, Hensmon, Manofearth and 2 others

TRANCEBLASTER said:
. Even at this moment there are unreleased high quality underground deep house tunes on youtube with more than 15 000 views, one week uploaded.
Click to expand...

Isn't it a completely different scene though? House and Techno is so popular right now, and terms like 'Deep House' are big search terms. If you make this kind of music of course you will see more hits. They also have these big youtube channels with many followers (hurfyd, housem, hate, etc). Simply put its a more mainstream scene with more mainstream, easy listening, familiar music.

Forescape Underground Trance, which is actually a very specific kind of Trance with the techno/psy/breaks/house influence's is so niche. There's only one podcast that would showcase it and its JOOF and even he prefers a different kind of 'deep/slow style of techno'. There's no youtube scene, theres no bandcamp scene. You need the digital infrastructure around you to at least provide a platform. It's a tough sell I think, very niche music. The House and techno guys literally lap everything up like its gods greatest, most is so average (but huge numbers).
Reactions: jetflag, Manofearth, Sleepy Robot and 1 other person

Don't be like Trance is a extremely unpopular or underground genre, isn't. We live in a golden age of promotion, it was never so easy to make random music so wanted and popular. Yes, these were my last words..

There is no Underground trance scene even..

Hensmon said:
Is the coffee or coke or whatever we spend 3 euros on per day an 8 out of 10 experience? How much money do we give to pointless consumables or material goods, yet spending 1 euro on a track seems unthinkable and they last forever. Don't you also find that by purchasing music you ask yourself to give it a chance and let it grow. I would never buy CDs back in the day and find myself labelling tracks 8/10 on first listen, it took time for the album to becomes all time great (some were instant likes of course, but many weren't).

And one last point... why not settle for a 7/10 and know you are also contributing to the lifespan of the scene and showing artists appreciation for such a small amount. We wont ever get a scene filled with quality again if we don't invest in it. We'll be waiting another 15 years if we only choose to spend money when the masterpieces come along.
Click to expand...

Haha, funny how people who don't support the scene come up with all kinds of lame excuses for not doing it. They also tend to be the biggest critics and think they're the biggest experts on what needs to be done to make things better....
Reactions: Enlusion

Fantastic tracks here, certainly one of the most enjoyable underground tracks from the year.

Its hard to determine if a true underground Trance scene exists, because those places where you might find serious Trance like this are being placed alongside more dominant Techno and Progressive House styles, and often the 'Trance' is with a blurred mix of those sounds, never really becoming full Trance. Forescape and JOOF are the prime examples of this. JOOF's latest tagging of his podcast is 'Techno'. I expect slower BPM when I open a Forescape release. So who champions Trance alone in a serious way...no one. This is not a criticism, just an observation.

As for marketing. Easier said than done @TRANCEBLASTER. JOOF is the big player, take a look at his youtube hits on his or his labels tracks. Pitiful. Take a look at Activa and Digital Blonde plays of tracks this year, also shockingly low. Anjunabeats will have much higher plays, sometimes 'hits', but more often than not they still fail in comparison to what the house channels and records achieve. Anjunabeats taking marketing to extremes I have never seen. Hensmon is right, the two scenes are in completely different places. House is more accessible.
Reactions: Sleepy Robot, Hensmon and Gagi
T

TRANCEBLASTER said:
Don't be like Trance is a extremely unpopular or underground genre, isn't. We live in a golden age of promotion, it was never so easy to make random music so wanted and popular. Yes, these were my last words..
Click to expand...

Digital Blonde for example doesnt even have 3000 listeners on Spotify every month, both JOOF and Airwave have really low numbers as well despite abandoning trance for like 4 years now. The scene is fucking dead, it has nothing to do about bad promotion. Trance as a genre has been declining in popularity since around 20 years now, its a sinking ship. If you as a label or producer wanna earn money start selling presets, project files, racks, samples & so on, there's the real source of at least some income.
It would be intressting to know the sales numbers for a label such as Always Alive or JOOF. In JOOF's case it would be interesting comparing the numbers with their techno releases from today compared to a few years back with more trance/psy stuff.
Last edited: Nov 23, 2021
Reactions: Hot Tuna and Gagi

This track already have almost 200 000 + likes. Trance is dead indeed. Even anjuna tracks only has a couple thousands, and its not really trance for that matter either. Trance is still left in the 2010s, its almost laughable. 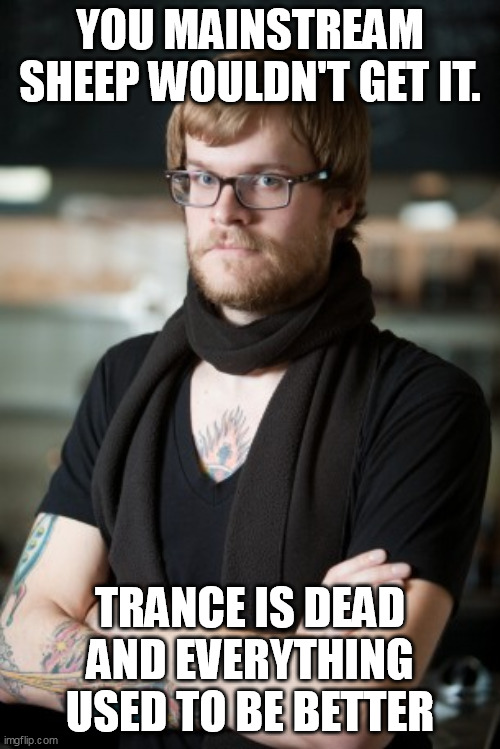 Getting a bit off topic now. Love the discussion though, would love to see it continue in the appropriate thread.
R

When is the bandcamp release @Enlusion?

HTY said:
When is the bandcamp release @Enlusion?
Click to expand...